Yavi is a store manager's best friend: where the whole team can talk and stay on top of their shifts. 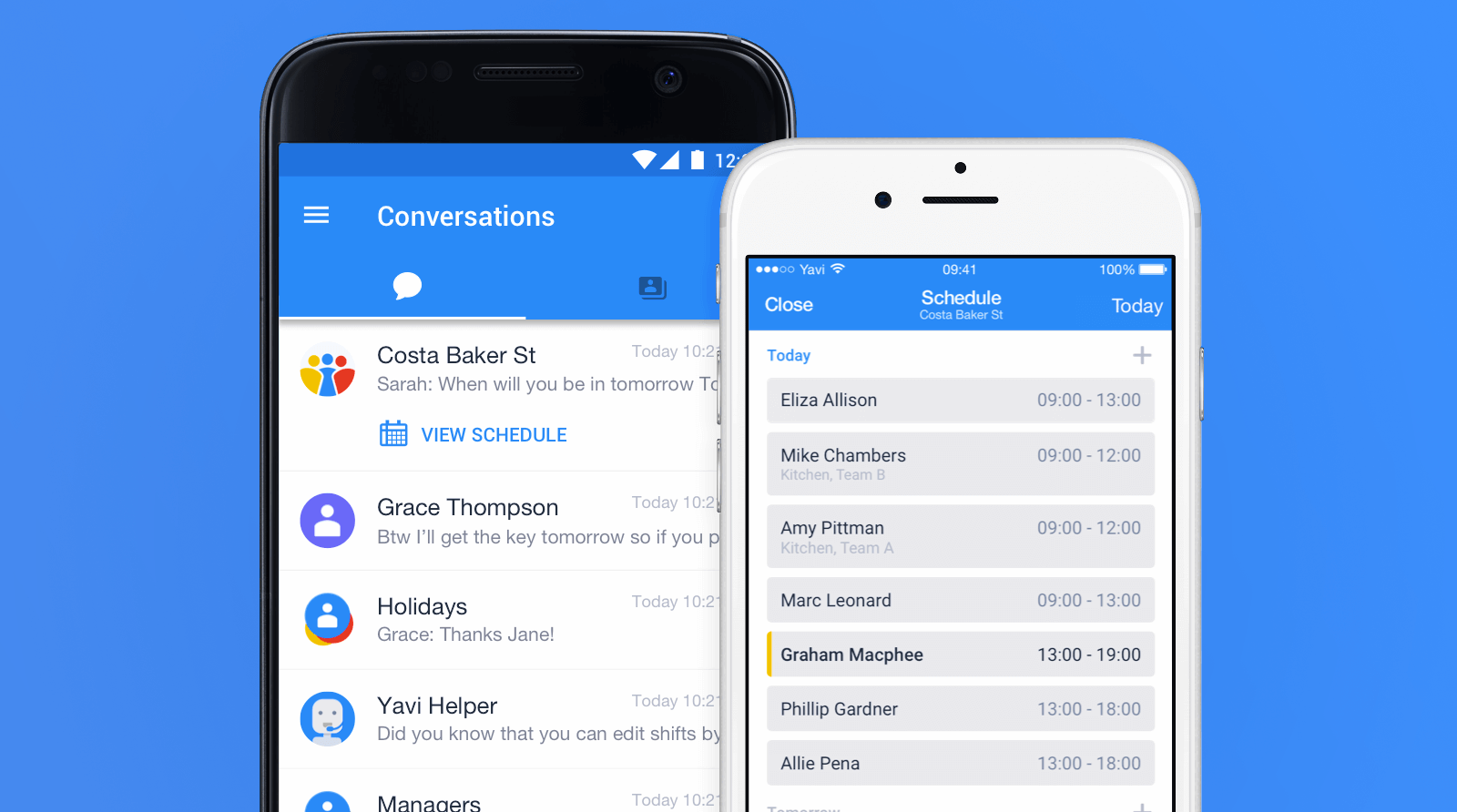 I worked as the sole designer on the Yavi product team, based in Edinburgh. When I joined, I took the Yavi iOS and Android apps from MVP to release in 3 months, with a focus on increasing engagement through messaging experiences.

I worked to understand the communication needs of frontline staff and how we might connect them to their wider organisations by conducting research. We used these insights to iterate on the product for over a year, achieving broad adoption within retail and hospitality brands like Domino's, Debenhams, Three, Vodafone, and thousands of small businesses.

Ultimately, we weren't able to scale Yavi's scheduling product to meet enterprises' needs, but we developed significant market, product and technical expertise along the way, and the team moved on to work together on several other ventures.

In hospitality and retail businesses, at the store/unit level, communication about staff scheduling is disorganised and disconnected from other business systems, causing staff to miss their shifts and costing businesses money (i.e. overtime paid or sales lost).

Shift workers/hourly workers generally feel disconnected from their employers, and don't always have a way to get the information they need to succeed, causing low employee retention and costing businesses money (i.e. recruitment and training costs).

However, while shift workers want hastle-free access to work information and to communicate with their team, they want more control over when their employer or manager can intrude into their personal time.

Here are a few highlights from my time solving design problems within Yavi's apps, systems and processes.

1. Turning a Photo into a Schedule 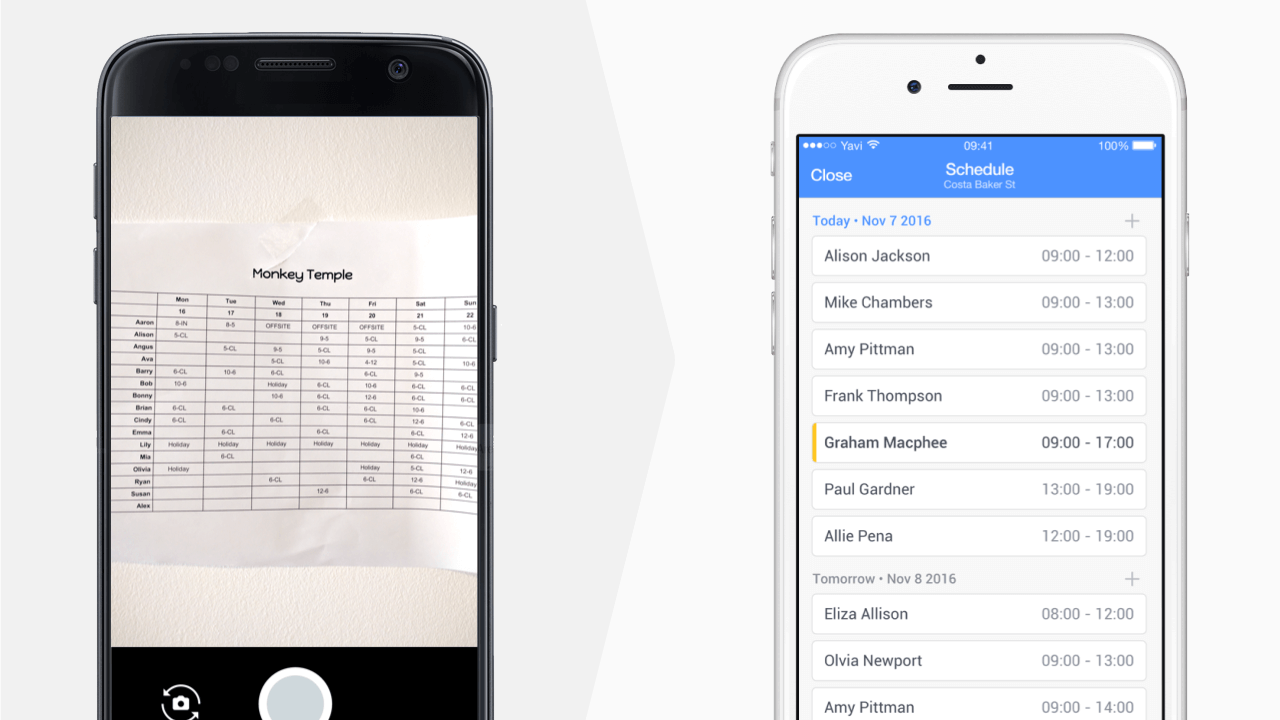 Yavi's "wow" moment occurs when a store manager sees a photo of a work schedule (often on paper, pinned up on a staff board) turn into a structured list of shifts in the app, enabling reminders, shift swapping and more for their team. However, this can be a difficult process to get your head around, with complex constraints to explain.

Iteration 2: After receiving several support messages about the duration of the import process (sometimes up to 2 hours), I included additional automated messages to set clear expectations and explain the next step: you'll receive a notification when your schedule is ready.

Iteration 3: Via user research, Yavi's product owner and I identified that some users were so anchored on their existing behaviour that they would often send a standard photo of their schedule rather than using the "Upload Schedule" option. I designed a more forgiving flow that would allow the user tap any photo they had shared in the app, and import it as a set of shifts to their schedule.

After these iterations, we saw a significant qualitative improvement in users' first experience of Yavi. 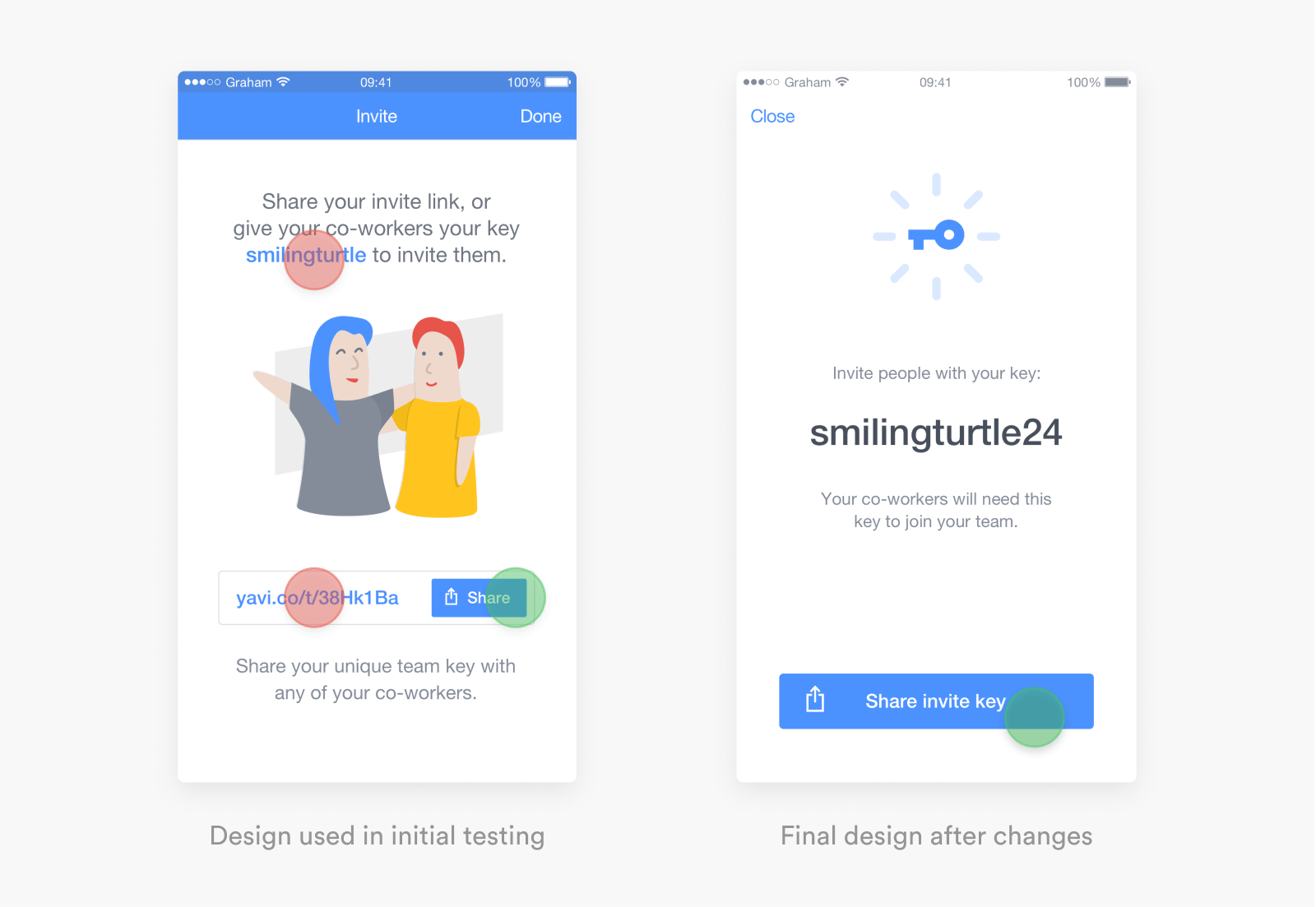 While designing Yavi's first invite system (the minimum viable version), I worked with Yavi's Product Owner to run usability testing to understand whether users were able to invite people to join their team in the Yavi app.

We learnt about several challenges users faced: several tried to tap on the invite key, thinking it was a button; several tapped to open the invite link instead of tapping to share it; most people did not read the text in full, so even those who were able to share their invite faced confusion about what would happen next.

In the second iteration of the design: simplified copy provides direct instructions in two steps; a new illustration focusses on comprehension of the process of inviting rather than just the value of inviting; the invite key is displayed as the primary content, letting the hierarchy of the screen guide the user; a larger share button clarifies the primary action.

This round of user testing ensured the invite flow we built in the Yavi iOS and Android apps was well understood.

In user research, we learnt that the most common communication related to scheduling was people requesting to change shifts (asking for a day off, or asking to swap shifts with someone else). However, we heard that requests were difficult to manage, and unstructured, often leading to miscommunication.

To solve this problem, I explored several potential ways of supporting workers in requesting changes to their shifts and supporting managers in handling those requests. I've picked out two differing approaches below: 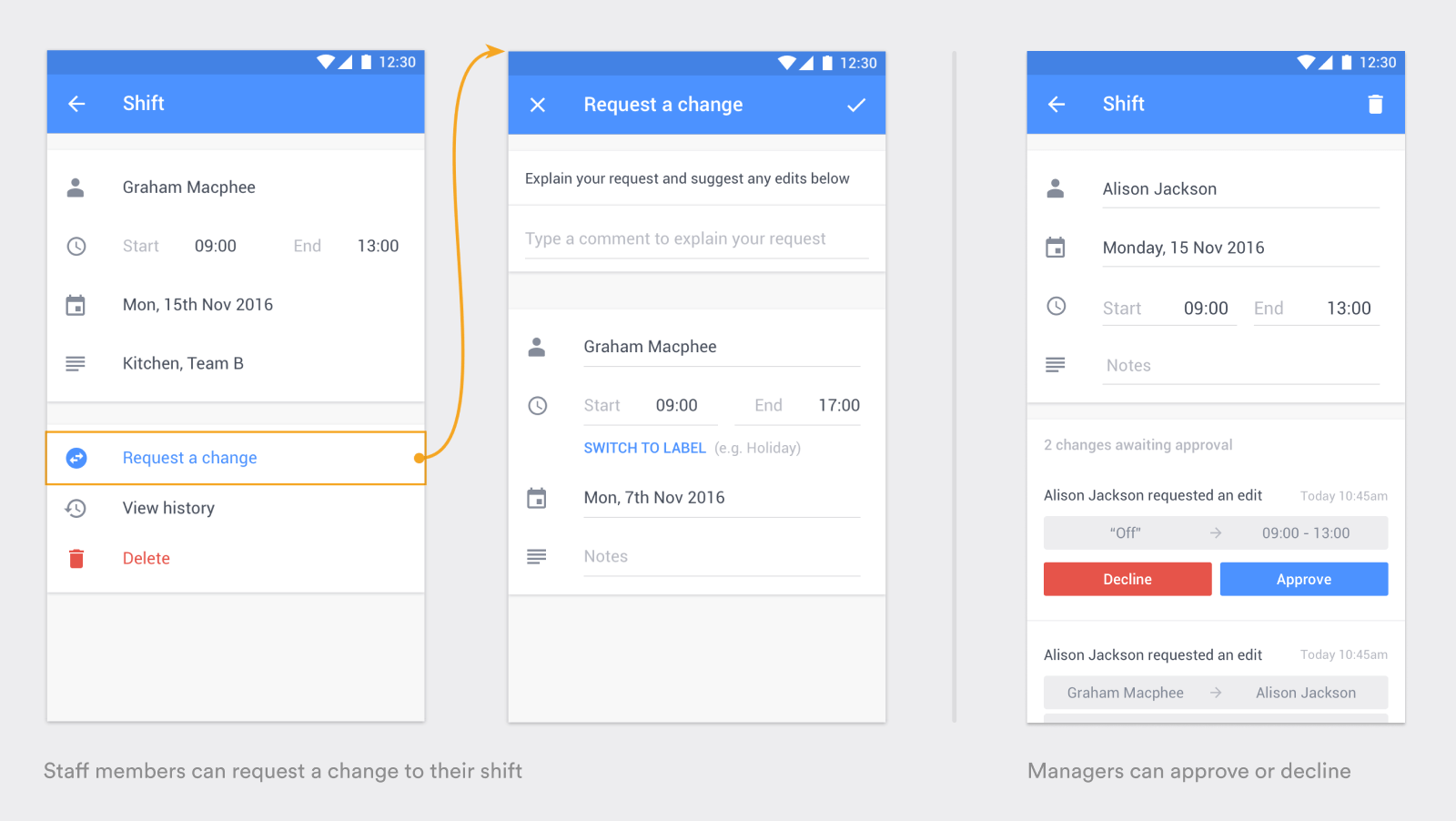 One approach was to let employees make structured requests to change a shift from the schedule. Talking to store managers, we quickly realised that they would need to be treated specially in this system: be notified about new requests, and be able to approve them. This solution had the benefit of being extremely well structured: we could notify managers of change requests, and the specific change would be clear to them when they viewed the shift.

However, there are several disadvantages of this approach: 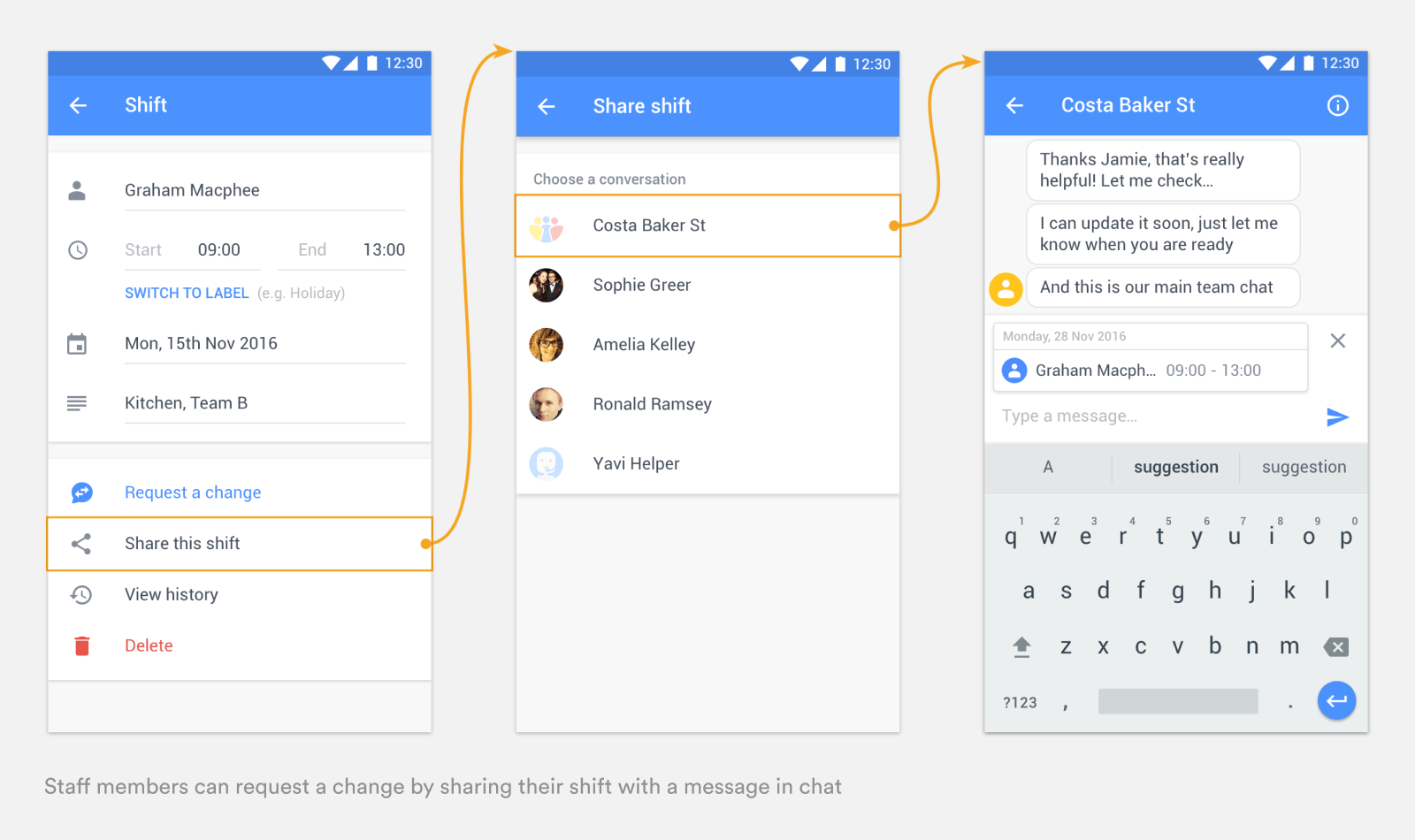 I explored a more freeform approach to shift changes: anyone could share a shift to any of their chats within the app. This single flow had two entry points to fit two distinct mental models/use cases: a "Share this shift" button, and a "Request a change" button.

This solved the two problems above:

In a final iteration, I built on this approach to add slightly more structure by listing out each instance a shift was shared on the shift detail screen to create an activity log. This final version was the neatest balance of clarity, flexibility and effort that we found. 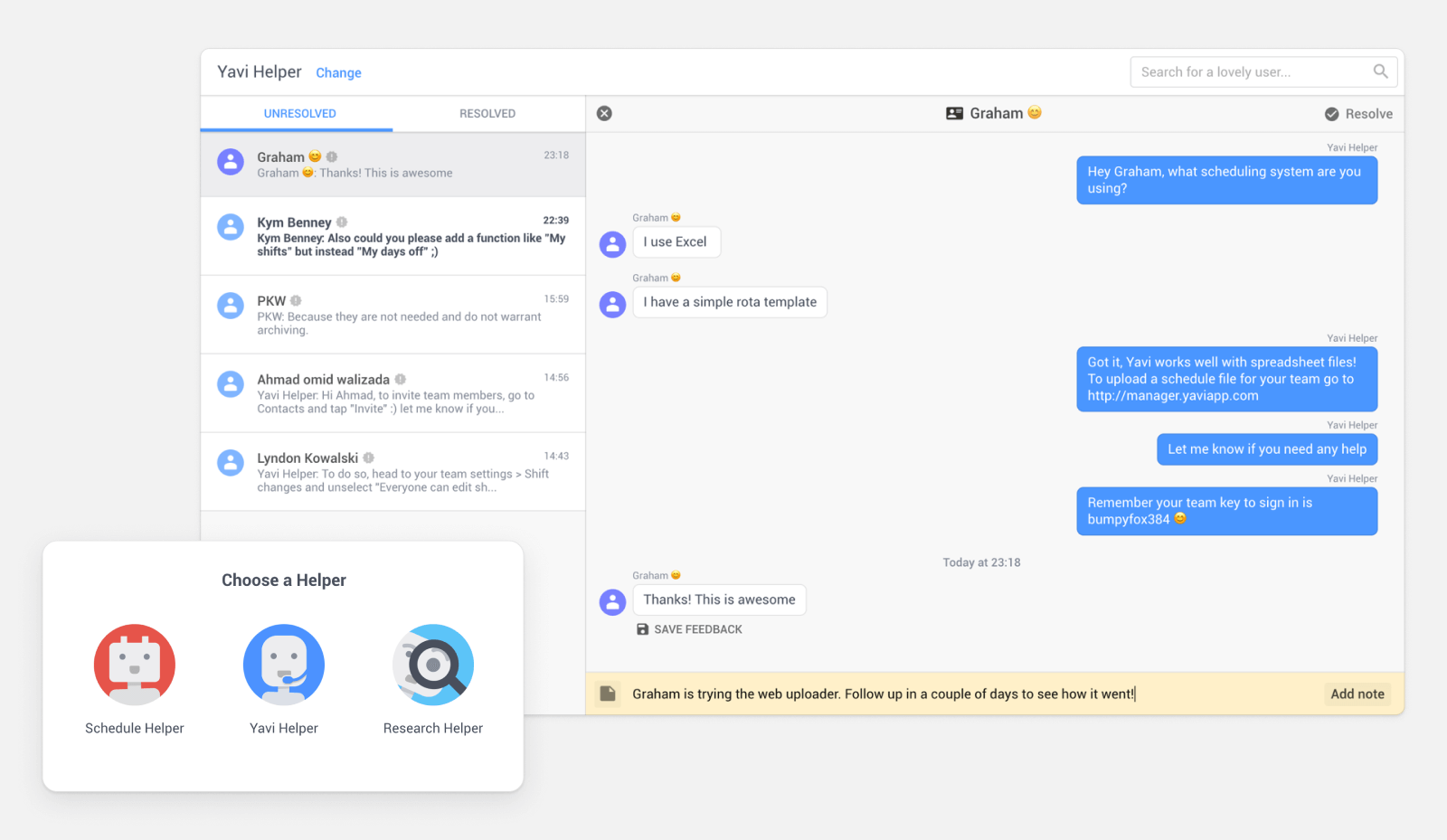 One of the founding ideas of Yavi, created before I joined, was "Yavi Helper", a support bot that was available directlty in your list of chats. We used Yavi Helper to provide ad-hoc support, and to conduct surveys and research. Initially, the only way to talk to a user as Yavi Helper was to use a special version of the iOS app.

During my time at Yavi, I built on the concept of Yavi Helper to scale the support we could provide to users, and to collect and track user feedback in a structured and actionable way.

After kickstarting the project during a hackathon, I designed and built...

Internal tools weren't the end of this project. Over time, I built on this work to create a full Yavi web app, with the core features of Yavi ready to use on web: users could view their chats and talk to their coworkers, import a schedule and view their shifts.

I'm particularly proud of this project because it was self-driven, started during a hackathon, and grew to provide significant value, both to our business internally and to our users.

Another side of Yavi's internal operations was the semi-automated ML system used to import schedules from a photo. Internal users processed imports through several semi-automated steps, including identifying a schedule table, transcribing text, classifying cells, and finally verifying the generated shifts.

As Yavi grew, we needed to rapidly scale the number of schedules we could import while still ensuring quality. Human input was a bottleneck we were working to remove entirely in the long-term, but our immediate goals were:

The orignal interface was built before I joined the team, and it revealed all of the complexity of the process. 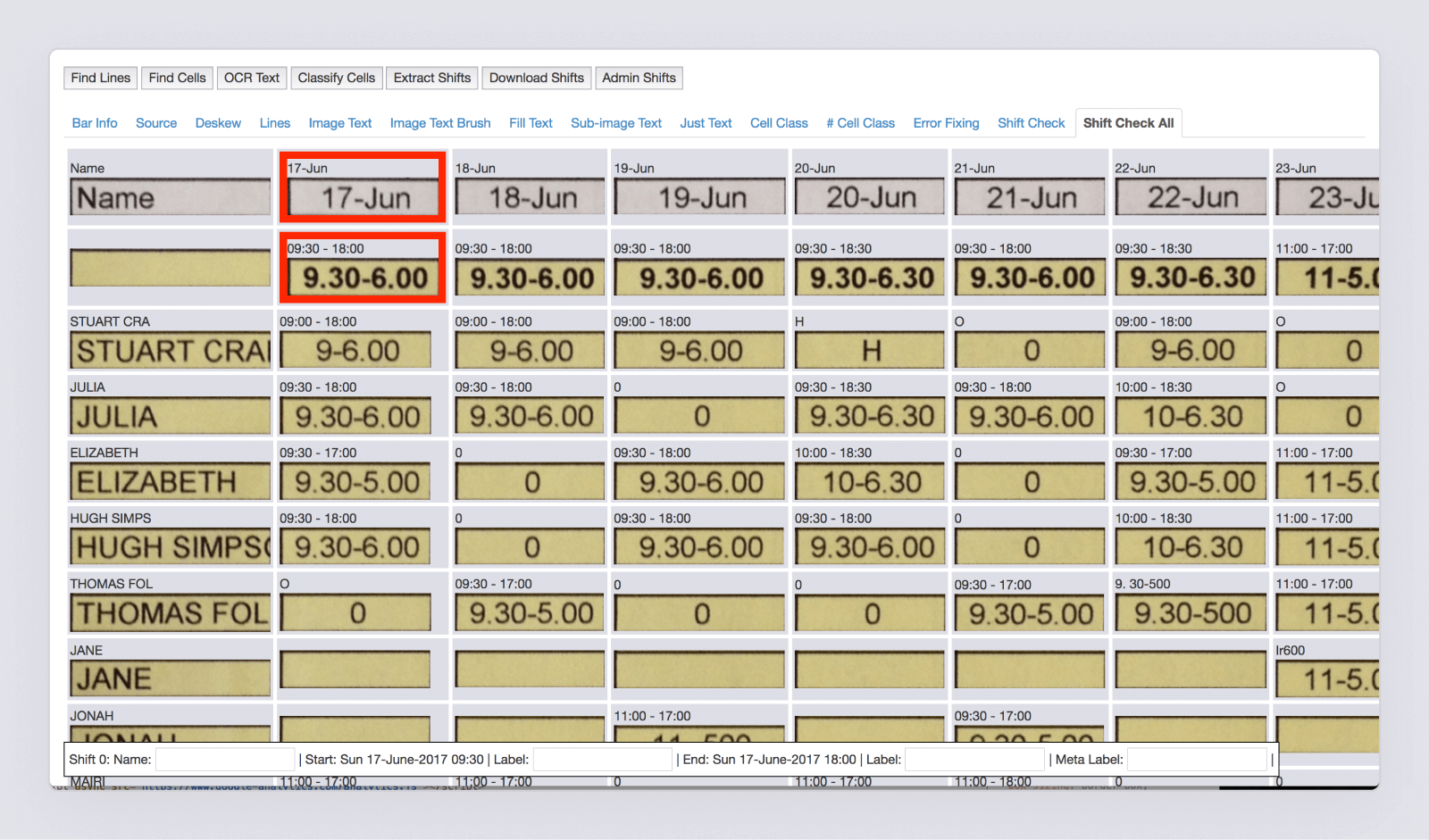 Some of the problems trained users faced were: Several steps required repeated manual action (e.g. transcribing many cells of text); it wasn't clear when something went wrong (e.g. unlikely times or dates, duplicate shifts), or how to fix the issue if it did; it was possible to import bad data into the app for users since errors weren't blocking. 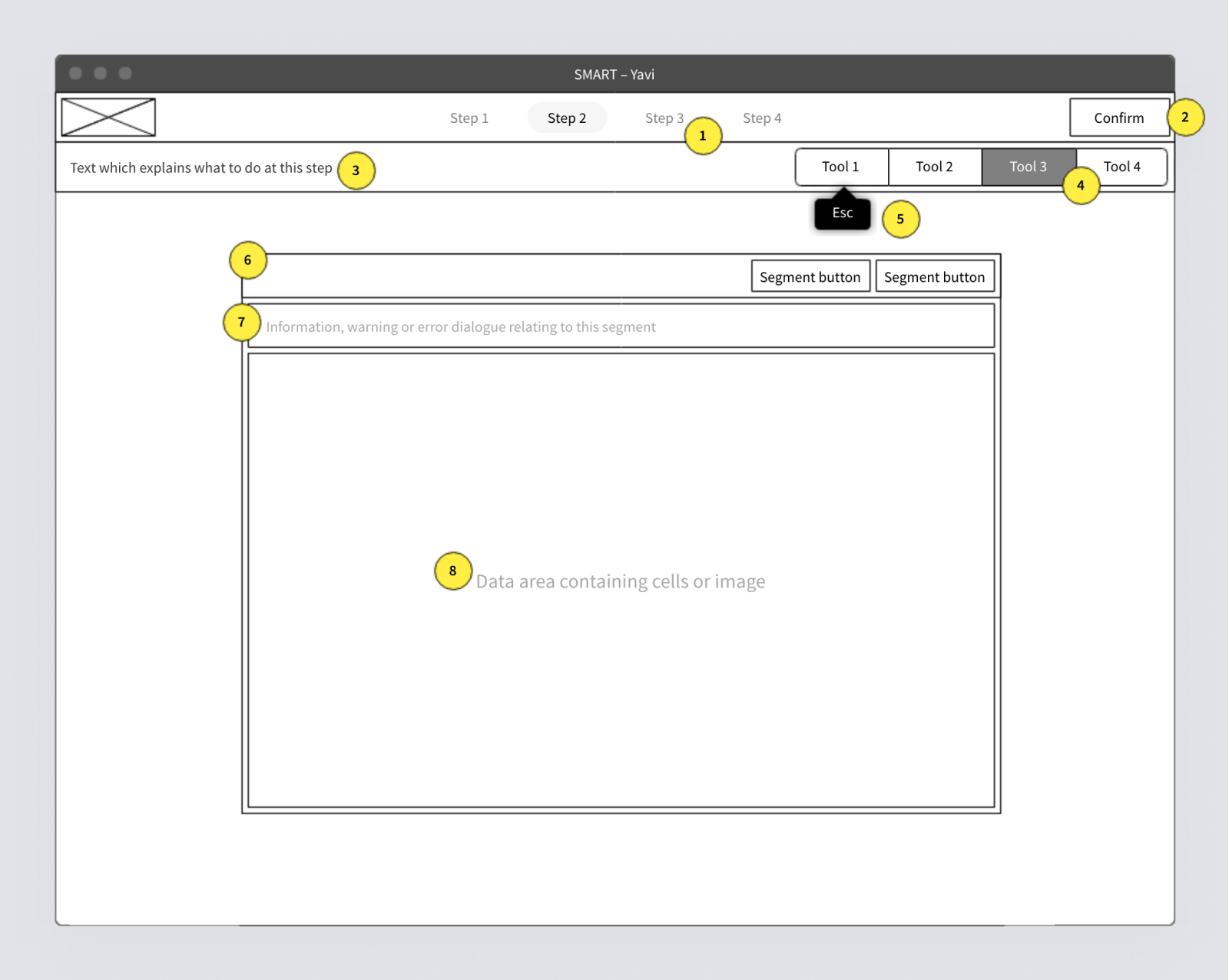 To me, it was clear that establishing an information architecture that people could understand was critical to reducing training time, and that interaction design improvements could reduce the time spent on repetitive manual tasks. I created wireframes and prototypes and ran user testing sessions with internal users. Through several rounds of iteration, I managed to design a significantly simpler process. 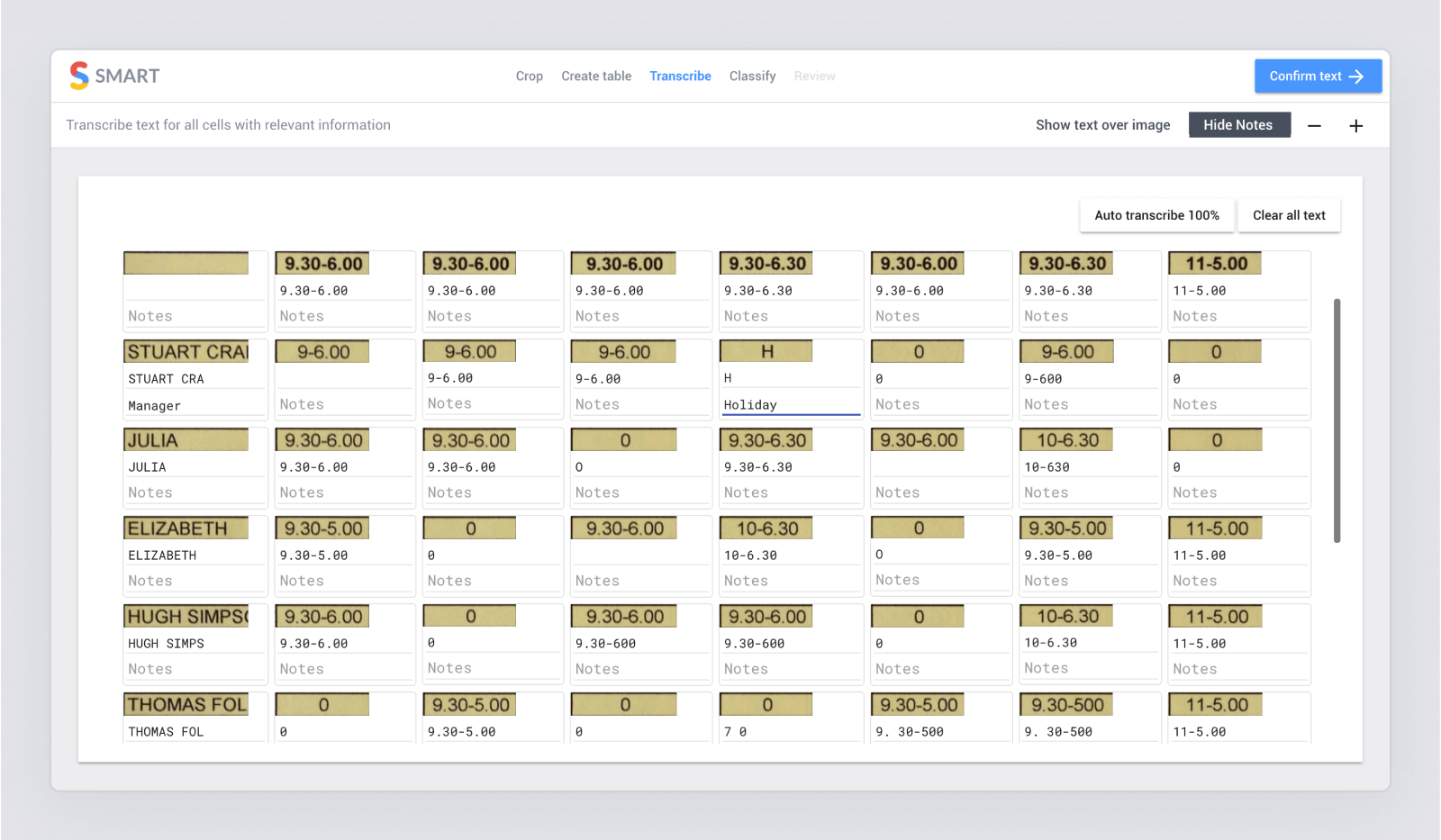 I worked closely with engineers on the implementation of the new information architecture and interactions, and worked with them to design around technical limitations as we discovered them. For the visual design of the tool, our goal was not to create a visually pleasing, polished interface. Our goal was to use reliable components from a well-used library to ensure quality and speed of development above all else.

This project had a significant impact on the number of schedules internal users were able to process, reducing the "time to process" for trainees and newer users closer to that of experienced, tech. savvy users.

6. Vision for a Work Communication Platform

Looking to the future of Yavi, we had ambitions to provide additional utility to teams, new utility for cross-team communication and, ultimately, provide value to enterprises by connecting their entire organisations. I balanced my time between immediate product priorities, internal ops priorities, and this future-looking work to help the team align on a north star to aim for. 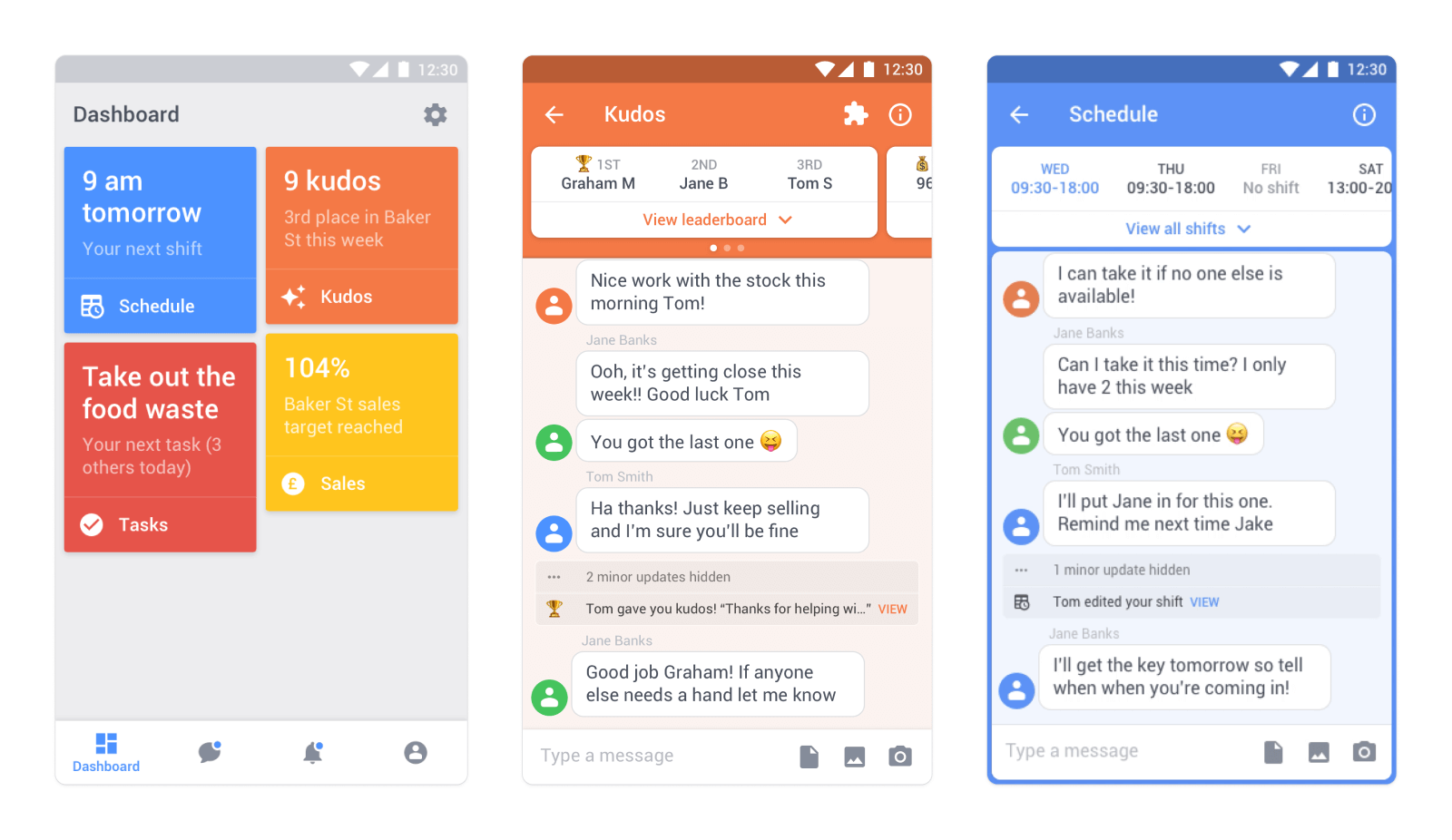 Starting with team and cross-team comms, we knew from our research that there were a set of core kinds of communication that were common across many teams in retail and hospitality. We had identified best practices by talking to innovative, high performing store managers and team leaders. With this understanding, I sought to design Yavi to encourage these good practices and to provide tools to make common tasks simpler.

In the course of exploring several core use cases such as employee recognition, scheduling, task tracking and goal tracking, I designed a system that would combine a chat with helpful tools in a dedicated space for each use case. For example, the schedule space consisted of...

While these were only long-term explorations, I wish I had the chance to take these forward into the product. I still believe this general pattern of providing specialised tools alongside a simple chat that people find simple to use could be valuable for many collaboration and communication use cases. 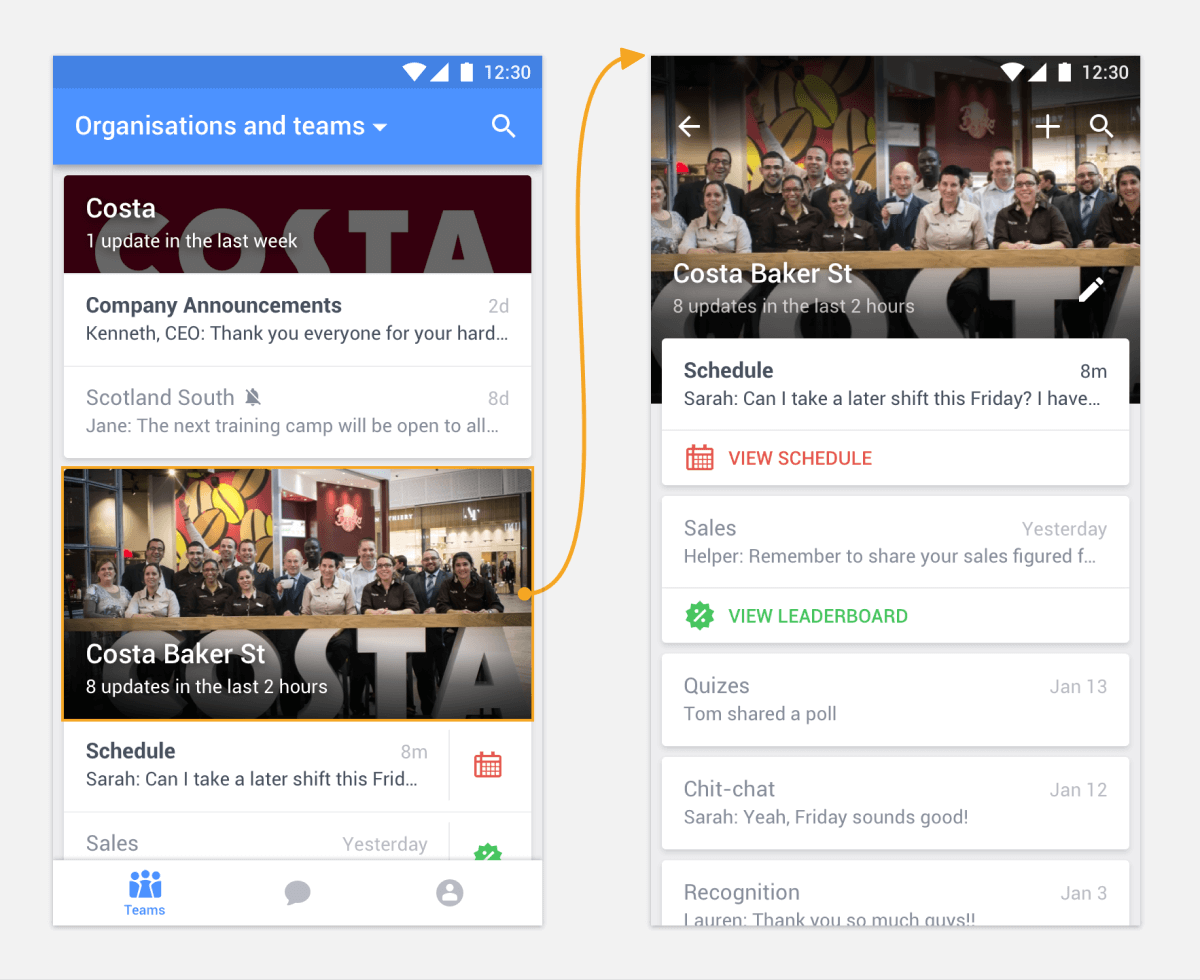 Looking forward to the second part of Yavi's vision, I explored how we might better connect frontline staff and HQs. This was the primary proposition we believed would resonate with large retail and hospitality enterprise-scale businesses, who often struggled with low employee satisfaction at work, low employee engagement, high staff turnover and high training costs for new hires. Employees usually receive all information via their manager, and their manager would be their main connection to the company. Our primary hypothesis was that by putting a name and a face to the nameless "HQ" and providing a direct channel for information sharing, and feedback gathering, we could improve employee engagement and satisfaction with their work.

Designs like the ones above were used by Yavi's business owners in conversations with potential enterprise customers to clarify what the value proposition of Yavi was, and why it would benefit their organisation as a whole.

Working on Yavi was a formative experience for me, and I learnt more than I could write here in the two years I worked on the product (both directly from colleagues, and from the experiences of driving to scale an early stage startup). Here are three of the learnings I've taken from working on Yavi:

I'll leave the final word to one of Yavi's early users. This is a small but helpful reminder for me of the outcomes I strive for with my work: making someone's life a little bit easier and helping their business' bottom line.

Yavi made our lives easier. There's no problem getting our rotas anymore and we all know what we are doing all the time. Can be updated at any time. Saves time and money.